Formula One racing fans are quite familiar with the phrase, “push, push, push.” Simply put, it acknowledges the need to keep moving forward toward your goal no matter how well you’re doing or what obstacles may stand in your way. Scott Sanders, CEO and founder of Octane Raceway, has made that phrase central to his business and his life.

“In business, you must push through the difficult times, sometimes changing directions, to truly excel,” acknowledged Sanders. “Over the past 12 years, I have weathered many ups and downs in the economy and instead of giving up, I have persevered and created an entertainment venue unlike any other that has become successful in spite of the countless business and economic obstacles.”

A self-proclaimed adrenaline junkie, Sanders loves everything from snowboarding to racing. Even as a boy, Sanders felt a deep affinity for anything and everything fast. He recalls frequent visits to the Phoenix International Raceway with his dad, Richard, and enjoyed taking his two nephews to their first Indy 500 this past Memorial Day along with his father. Strangely enough, though his current career path perfectly aligns with his personal interests, it is a huge deviation from where he began.

One of the top four universities for management information systems at the time, the University of Arizona, was a perfect fit for Sanders to pursue his interest in business and technology. He knew that the skill set would be in high demand and it happened to be a major he loved.

Upon graduation, Sanders accepted a position with Andersen Consulting, now Accenture, which proved to be a true use of his MIS degree.

“While overseeing a world-class karting venue does not seem to be an obvious use of my MIS degree, I still rely heavily on the processes and people management skills inherent to that business area,” noted Sanders.

Specializing in business process redesign, he thrived in a company culture that encouraged out of the box thinking and the relentless pursuit of creating solutions that met or exceeded his clients’ expectations. That culture and drive to create best in class solutions translated well into visualizing and managing Octane Raceway.

Although he enjoyed his job, traveling Monday through Friday every week took its toll after more than nine years and was one of the key reasons he was primed to find another opportunity. During his tenure at Andersen, his original vision for Octane was born.

“It was at Andersen Consulting that I first became acquainted with the idea of work hard, play hard, which is how I continue to operate today,” recalled Sanders. “We would do whatever it took to solve our clients’ problems, working long hours and leveraging industry leading best practices to devise solutions. Whenever we wrapped a project or reached a major milestone, my colleagues and I would find ways to go out and celebrate.”

Sanders remembers the first time he was introduced to indoor karting. During a particularly large project in Southern California, a few members of his team were discussing a venue they had visited to race karts indoors. At the time, there was nothing like it in Phoenix and Sanders’ interest was piqued.

“The concept of indoor karting was foreign to me, but given the fact that I love racing, the idea took hold even before I visited the facility. A few of us decided to go check it out, which was fun, but it was just a basic racing experience,” recalled Sanders. “My consulting mindset kicked in and I thought, how can I do this bigger, better and faster?”

The concept of indoor karting was foreign to me, but given the fact that I love racing, the idea took hold even before I visited the facility.” 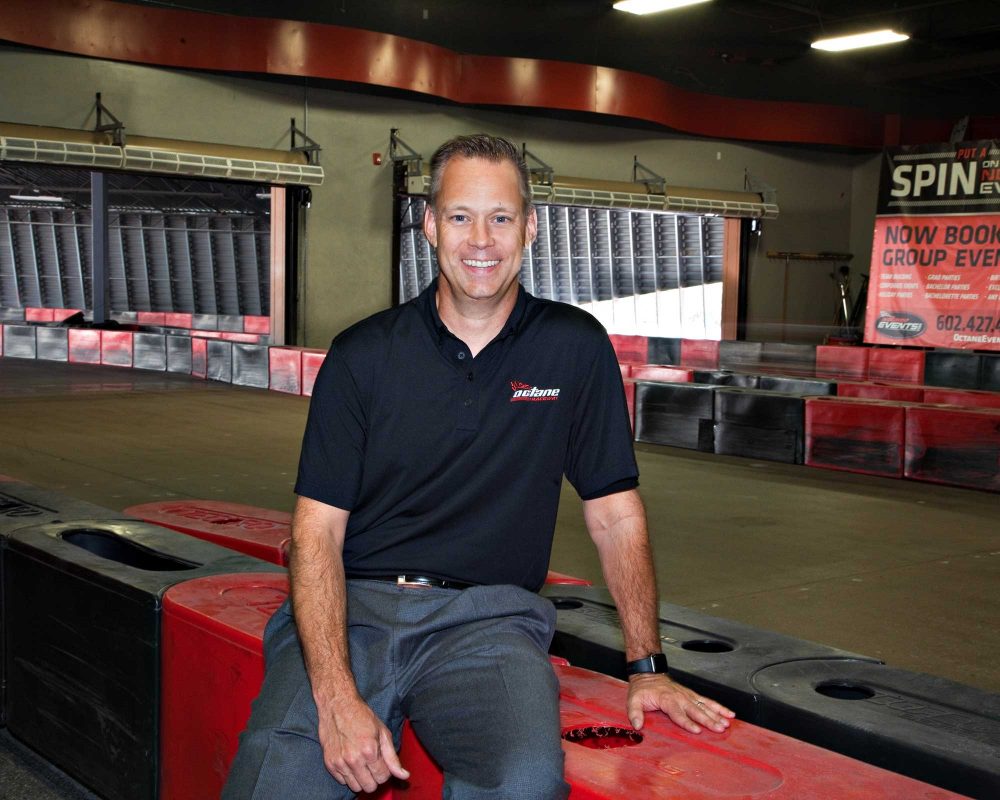 Sanders began to research the feasibility of creating a new type of multifaceted entertainment venue that focused on his work hard, play hard mentality and the merger of team building and karting.

“Racing is the second largest spectator sport both domestically and abroad, but racing itself is virtually inaccessible to most people due to the cost involved,” said Sanders. “Indoor karting, however, is a different story. It is an affordable form of racing for the masses. There were only a few tracks in the United States at the time so the market was wide open. And, I began to think about the possibility of having meeting rooms and catering at the venue to accommodate company meetings and team building events with the meeting rooms doubling as party rooms for the general public when not in use.”

Taking advantage of a six-month flex-leave option at Andersen, Sanders dedicated his time to fleshing out a business plan.

“I was fortunate at the time that my company offered the opportunity to take a partially paid sabbatical,” noted Sanders. “So, I used that time to research the best indoor karting tracks in the world including Holland, Germany and the United Kingdom. Karting in Europe was at a more mature business cycle and the level execution far exceeded the fledging U.S. market.”

During his absence, the company extended their leave policy to an entire year and Sanders took advantage of the added time to finalize the details of his idea and create a compelling business plan to present to potential investors.

In 2003, with investor support, Sanders opened F1 Race Factory. Over time, Sanders has tweaked his original vision to include a sales force dedicated to the corporate market for team building and team incentive outings and a separate sales team dedicated to social events including birthday parties, bachelor parties and fund raisers. Octane offers a comprehensive venue for businesses and the public including on-site catering, state-of-the-art meeting rooms complete with high-definition audio/visual components, karting, arcade games, mini bowling and a pit crew challenge.

“I am also an advocate of practicing what I preach,” noted Sanders. “I want to make sure that all of our employees remain engaged, so I create team building opportunities both on and off-site for our team as well.”

Arizona was one of the hardest hit states during the recession, and businesses like Octane Raceway were particularly vulnerable, relying on corporate bookings and a public clientele that was experiencing a drastic reduction in discretionary funds.

“All businesses suffered during the recession, and many were forced to shutter their operations in its wake,” said Sanders. “While I insisted on maintaining our advertising presence, we also heavily focused on honing our business model to run more efficiently while never skimping on the overall customer experience. The downturn was a trying time but provided a wealth of educational opportunities to leverage and ultimately helped transform Octane into a better and more efficient business as a result.”

In 2011 as Formula One was preparing for a return to the United States after a long hiatus, Sanders opted to rebrand F1 Race Factory to Octane Raceway to avoid a legal conflict with the racing giant. “We believed the F1 Race Factory name was well within the boundaries but at the end of the day our customers were our customers because of the great racing entertainment experience we provided and not due to our name. We were and are a true entertainment destination and the decision to rebrand to Octane Raceway was quickly embraced by our customers and the business did not miss a beat,” explained Sanders. “Our customers just rolled with it.”

In 2013, Sanders oversaw the company’s move to its current location in Scottsdale. “The move to the Pavilions at Talking Stick marked a new chapter for Octane Raceway. The retail location in the emerging Talking Stick Entertainment District proved to be an even bigger hit with our corporate and public clientele. With easy access off the 101 freeway, the new upscale facility features a state of the art all-electric fleet of French built Sodi racing karts. Octane was the first track in the United States to feature the karts with speeds of up to 45 mph. They handle just as well as a gas kart without the fumes or noise. They are the next generation for indoor karting venues and our clientele has embraced the technology,” says Sanders. 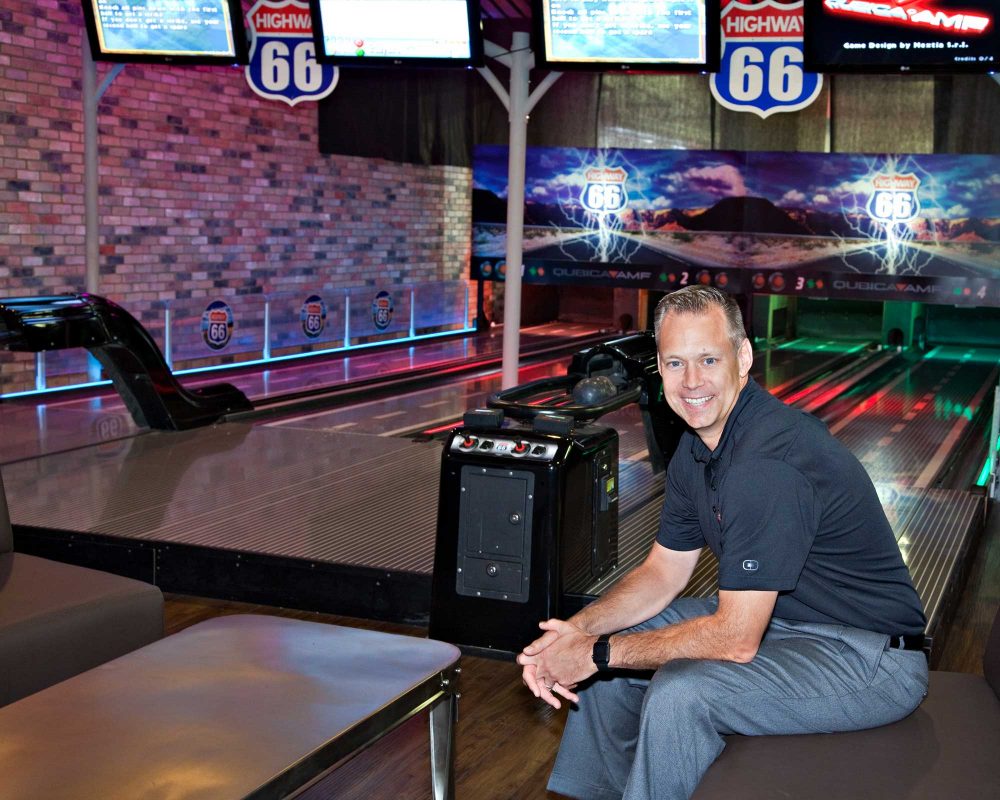 “Do I love my job? Absolutely! But, contrary to popular belief, it really is work,” joked Sanders. “I honestly don’t spend the entire day racing against our customers on the track. I am grateful to work alongside a staff of 50 quality employees that help create a memorable experience for our customers each day. My general manager, JP Mullan, has been instrumental in taking our execution to the next level and allows me the opportunity to focus more on the expansion of our brand.”

Last year, Sanders was able to buy out his original investors and is now the sole owner of Octane Raceway.

“My investors and I had differing visions about the future direction of Octane Raceway,” noted Sanders. “I am committed to growing the concept and spending money where needed to ensure we continue to raise the bar in our industry. The ability to further invest in the current operation to make that a reality has been very rewarding.”

Sanders has recently expanded his current location to include a four-lane mini bowling alley, an all-new arcade and has plans for upgrading the bar and grill in the near future. Additionally, he is researching a few new locations around the Phoenix area to replicate the success he has had with the original Octane Raceway.

“As all entrepreneurs know, owning a business is like being on a roller coaster,” explained Sanders. “It has its ups and downs. The hours are relentless, but the highs of delivering a great experience to our customers and finally realizing you have made it are well worth it. And, when you have an amazingly supportive spouse as I do in my wife, Julie, you know you are truly blessed.”