I am extremely competitive. I like it when we get orders or contracts. For me that’s a victory. Many times when I was younger I’d be working to nine or ten at night on my marketing or bending tubing and I took extreme satisfaction knowing that while I was at work making gains, my competitors were at home watching television or having a glass of wine. That drives me and that’s something that comes from family. It’s about winning and competing and challenging yourself,” says Rudy Martinez, owner of Shade ‘n Net.

Shade ‘n Net specializes in commercial, industrial and residential sun shade structures and sails to provide maximum sun and hail protection designed for a variety of outdoor areas requiring UV protection and shade. Structure sizes and uses vary from a simple single-post umbrella for home use to an extreme-span shade structure for a basketball court. The firm has 35 employees and has recently bought a 25,000-square-foot building to house its expanding operations.

Martinez says, “We have a ton of clients we’ve had for many years and once we have them we retain them because our main philosophy is to do our best to ensure that our clients have no desire or need to search elsewhere. We have many clients who refuse to buy from our competitors because of our service. We stand behind our product and warranties 100 percent.”

It wasn’t really cartoons for us as kids; we were putting fasteners together.”

Martinez was born in Phoenix. He attended high school in the Alhambra District and went to Phoenix College. After graduation he started working full time in the family business, a fastener distribution company called Mar-Bro Fasteners owned by his father and his uncle.

“My parents were old school. They worked hard and if they weren’t working they were cleaning offices at night or my mother was building furniture on the side. They instilled in me a strong work ethic. It wasn’t really cartoons for us as kids; we were putting fasteners together. My father would bring home kegs of structural bolts and my sister and I would put together nuts and bolts for a penny a piece. Of course, my father was getting three pennies a piece. We were always working. On certain nights when he had a large order our bedtime would be extended. What today might be called child labor, we called survival,” Martinez says.

Working in the family business shaped his work ethic, business philosophy and drive for success. He worked there throughout grade school and high school. During his college years, where he studied fire science, he worked during the day and attended school at night.

In 1989, the family opened a branch in Tucson and his father and uncle offered him the opportunity to open that operation. He was 22 at the time.

Originally he was supposed to just run the warehouse in Tucson. As he evolved in management skills during the first two or three months, he found himself running the entire branch. “I enjoyed that. It was fun and exciting to start a new business in a new area. Being young and single, I was able to work early and late and put in long hours. That makes for a fairly decent growth pattern if you know what you’re doing,” he says.

After three years, his father and uncle parted ways with the uncle taking over the manufacturing company and his father the distribution company. Martinez stayed with the family operation four more years. 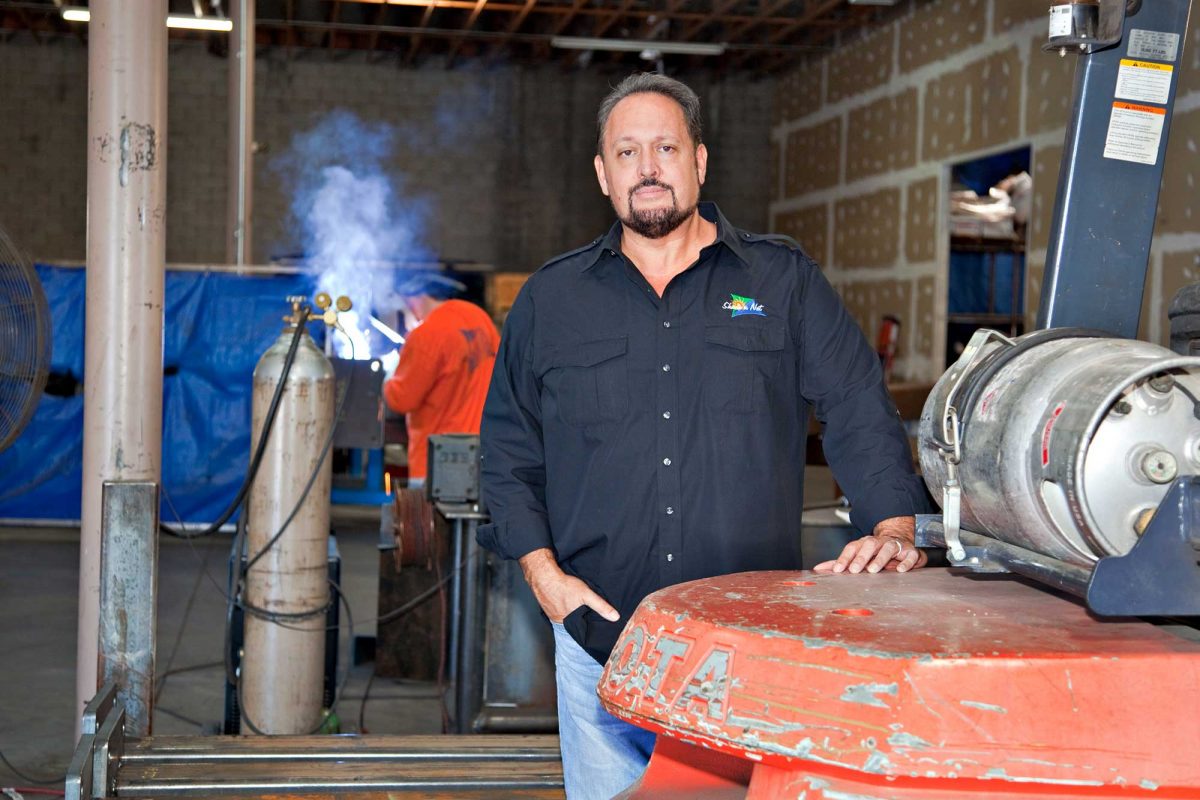 Martinez took the new citizen somewhat under his wing. “I saw that he was being taken advantage of and so I began to help guide him in business. I was just trying to help him out because he was a decent person,” he says.

The partner began trying to convince Martinez to become a U.S. business partner. Initially, he resisted because his hands were full with his own family’s business. Later he realized the potential for the business and after much prayer took up the partner’s offer of 50 percent of the company. The plan was for Martinez to begin setting up the firm here while the partner returned to Australia to raise the necessary capital to properly launch and maintain the business.

The partner never came back. Martinez discovered that the company had a lot more payables than receivables. “In that interim I had popped what savings I had into the company to keep it afloat. The Australian fellow called and apologized, but I had already pumped all my money into the company. I couldn’t go back. There was nowhere else to turn. That was in 1995 and that was followed by three challenging years because I didn’t take any compensation.”

In addition to the financial challenges, the product early on wasn’t received well in the United States and particularly in Arizona. Martinez approached school districts and municipalities, but met with stiff sales resistance. His potential customers were used to putting steel structures and felt that the Shade ‘n Net fabric structures wouldn’t hold up to the sun and extreme weather conditions. “They just didn’t know the product,” Martinez says. 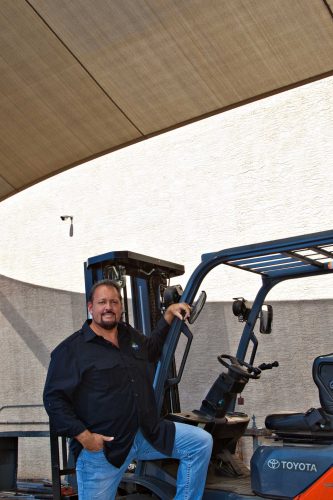 A Change in Tactics Leads to a Change in Fortunes

“The car wash guys were interested and started to buy a few. They weren’t interested in UV protection and heat protection, however. It was more about street appeal to them. They just wanted to draw attention to their businesses. The same thing with the auto dealers. Instead of renting tents they could buy a structure that would be up year round. That was the first line of customers for us,” he says.

After that he turned his attention back to the school market. He found an opportunity in a call from an interested administrator who said that her school needed a structure to cover a large area where students were exposed to the sun. Half of her team liked the idea of his fabric structures, but half of the team was opposed. “I offered to put up the structure and that if they didn’t like it, I’d take it down and leave the grounds as if it was never there. If they did like it, we’d put together a contract and they’d pay me for it. They couldn’t say no to that.”

That was the marketing strategy Martinez started using at other schools, carefully selecting locations with high exposure. He credits those efforts to his firm’s increase in recognition, especially when people could see Shade ‘n Net structures holding up to the environment year after year.

Martinez pitched one school and the maintenance administrator said outright, “We’ll never buy that type of structure. It won’t last. Kids will tear them up.” Martinez says, “I tucked my tail between my legs and walked out of his office.” Almost two years to the day the administrator called and handed Martinez a purchase order.

“The parents who had seen these structures at other schools were upset that there wasn’t one over their kids’ playground. The school districts got dragged into it by the parents. That was a huge factor at about the five-year point in our history,” Martinez says.

A Bit of a Cutup

Martinez says one of the reasons his firm has a low turnover in employees is his commitment to balancing hard work with a lighthearted atmosphere. “Three of the most important factors in the success of the company are my faith, operating with 100 percent integrity 100 percent of the time, and seeking out and finding co-workers who have a strong work ethic, high energy, and a desire to succeed.”

“I guess it starts with me. I’m a bit of a cutup. If I’m not laughing and enjoying my time with others, I’m not interested in doing it. We have a good time here. My desire is always to get up in the morning and want to go to work. The only way to achieve that is to make the workplace a desirable place to be. It’s not very regimented or rigid. If you’re not having fun doing what you’re doing, why do it? It’s very entertaining here, but when it comes to customers, we’re very professional.”

Keeping things light when appropriate works well as a management tool when business pressures mount. “For example, if we have to call somebody to say there’s a delay in delivery because a city hasn’t issued a permit or whatever the reason people get upset. I have to tell my people not to get too stressed over it. What we do is important, but we’re not performing brain surgery on children. Nobody’s going to die today. Do the absolute best you can do, and everything will eventually work out,” he says.

“Our customers know that we’re always going to stand behind our product and service. That’s not only good business, it’s also just part of my nature. Once we’ve served a client, I never want that client to go away. I also consider many of our clients personal friends,” Martinez says. 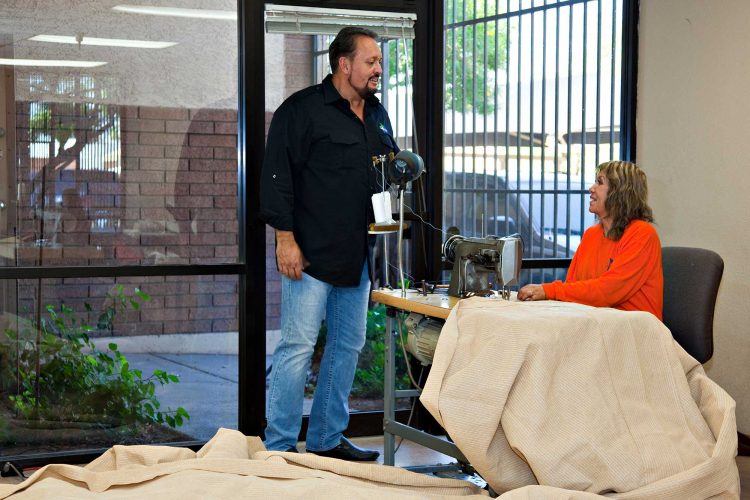 On the Personal Side

Martinez believes in giving back to the community and every year targets 10 to 12 projects where he donates structures valued from $10,000 to $12,000 to worthy causes or organizations, such as Crisis Nursery, Ronald McDonald House, or the Make A Wish Foundation. “We try to do what we can where we can,” he says.

Martinez and his wife of two years, Gwen, enjoy traveling and just walking the neighborhood or vacation spots together. They knew each other for 14 years before getting married. She is originally from Zambia, became a U.S. citizen in 2012, and is active with impact investment projects in her birth country.

Martinez still enjoys playing basketball and he rides a bicycle four or five times a week.

Throughout all the challenges, Martinez’ faith has kept him going. He taped some scripture beneath his keyboard, his favorite being Philippians 4:13, which says, “I can do all things through Christ, who strengthens me.” He says, “I’ve often leaned on that verse when trials have gotten tough. There was more than one occasion in the early years when it was just myself and one or two co-workers that I would arrive at the office to find an eviction notice on the door, because cash flow was so anemic. Since becoming a Christian at the age of 27, I’ve had the comfort of knowing that if I’m steadfast in my faith, do my best to remain a strong steward, and always honor God in my actions, I’ll be fine, business or no business.”