Unveiling the Myths of Modern-Day Parenting

She’s been hailed as a true, 21st century hero. And, while Kimberly Cabral might not sport a cape this powerful lady, founder and publisher of MASK (Mothers Awareness on School-age Kids) definitely has superpowers.

Admittedly, there’s no leaping tall buildings in a single bound or casting  spidey webs, but Cabral has vaulted over red-tape obstacles and cast a web of nurturing enlightenment over children and their parents. Born of concern and care for her own children’s well-being and safety, Cabral sprang into action after a casual conversation with her oldest son who was a sixth grader at the time.

“We never discussed tough or sensitive topics in my family growing up,” she says, “and I was determined that would not be the case with my children. One day in the car I just brought it up by saying, “Bud, when I was your age kids were talking about sex, have you heard anything?’ It literally stemmed from an hour-and-a-half conversation.

“He started telling me how kids were smoking pot, engaging in oral sex, sniffing Purel and bullying,” she says with dismay. “I mean I was thinking, ‘I’m an involved parent, I know all these families, we’re in a good neighborhood. How can this be happening?’ He hadn’t done any of these things; it was just the fact that this was going on in his world. It felt like he had just been waiting to talk about it.”

After another conversation with her fourth-grade son, Cabral realized that she couldn’t be the only parent unaware of how young children were being exposed to the darker side of life. Her first instinct was to find resources within her community to help guide her. When she discovered a dearth of such support, her “superpowers” kicked in and she accepted the challenge.

After everything I learned, I realized all these topics – self-esteem, drugs, eating disorders, bullying or what have you – are all interconnected and the behaviors really start in elementary school.”

From the Ground Up

“I started researching nonprofits and was trying to educate myself,” she says. “In the process, I found they were very topic specific and even at that, they didn’t start those educational talks until middle school and high school.

“After everything I learned, I realized all these topics – self-esteem, drugs, eating disorders, bullying or what have you – are all interconnected and the behaviors really start in elementary school,” she continues. “Why aren’t we talking about all of these things starting in elementary and educating our kids as they grow because they’re really life skills. It’s not just a question of talking about these things but teaching our children how to deal with them.”

This led to the genesis of MASK. Launched in true grassroots style, MASK is a nonprofit 501 (c)(3) organization created in 2007 by a group of dedicated mothers who recognized the need to consistently educate families on rapidly changing issues. The MASK mission is to engage and educate parents, children and the community about the issues facing youth and to empower children to make safe, healthy choices.

It used to be pretty straightforward. A parent’s job is to care for and protect their child. Obviously, this begins by providing the basics – food, shelter, clothing and a watchful eye to guide them through and around dangerous obstacles. Straightforward certainly, but it seems with each generation protecting our children becomes more challenging.

Parents of the 1950s worried about the bad influence of rock and roll and that newfangled thing called television invading their homes. The ’60s and ’70s brought a surge of youthful protests and the widening experimentation with drugs. Late ’90s and early 2000s saw what was potentially an even greater threat to our children’s safety and innocence, the advent of the internet.

Fast forward to 2021 and the world has unquestionably become a much more frightening place. Easy access to virtually any information – much of which is a decidedly negative influence on young minds and spirits means the “bad guys” aren’t just “out there” anymore, they’ve invaded our homes. Things, people and temptations that today’s parents were blissfully ignorant of in their youth, are alarmingly commonplace in the world our children inhabit.

Cabral was (and is) what most people would describe as a great mom. Full time, stay-at-home mother to her five children of their blended family, she might be likened to TV ideals such as Carol from the Brady Bunch. And yet, even with her hands-on approach and active involvement in every aspect of her children’s lives she hadn’t even suspected that they were being exposed to so many nefarious things at such tender ages.

“I felt I needed to share with other parents what I discovered and ideally join forces to create programs that would address the changing times,” she says. “I know this is something I’m supposed to do, and I just want to get it out there.

In a program that now has grown dramatically over the last few years, Cabral began by simply reaching out to the families in her immediate community.

“We had 120 families show up to our first meeting,” she says. “It was incredible, and the second one we nearly doubled that number. So, it was the big ‘Ah-Ha’ moment when we realized we were on to something.”

From there the group got approval to hold their age-appropriate programs on half-days at school, which led to holding them during school.

However, it wasn’t without frustrations and stumbling blocks. Based on MASK philosophy, “You have to educate the kid, the climate and the reinforcement.” Cabral knew that the only way her program could truly make a difference was with the support and involvement of as many parents as possible. To this end, the group offered parent versions of whatever their children were being taught. She was both discouraged and confused when interest and participation didn’t immediately happen.

“In a school of maybe 1200 students, we’d have maybe a half dozen parents show up for these talks,” she says, “and I was baffled. This could take a child’s life; I mean kids are killing themselves! I was racking my brain trying to figure out how to reach these parents.”

At the time Cabral’s husband was publishing a magazine and suggested MASK might do the same. Already juggling her own family as well as the burgeoning responsibilities of the new organization, Cabral initially dismissed the idea. However, fate seemed to be sending signs that this was definitely the next step.

“I would be in the grocery store or Target and literally have to pick up a magazine off the floor to get by,” she recalls. “This happened several times and invariably it would be a parenting magazine. Finally, one day I took a moment to glance through the pages only to realize there was no real substance.

“There were ideas for like a hundred different things to make out of an egg carton,” she laughs, “but there was nothing addressing the real issues.”

That lightbulb moment led to the inaugural issue of MASK The Magazine. “Our very first issue was the Bully Issue,” she says, “that was in 2011 and we actually received a national award for that. We traveled to New York to accept that and were in the same room with People Magazine and Bloomberg.

“Honestly, I thought we were going to get punked,” she adds with a laugh. 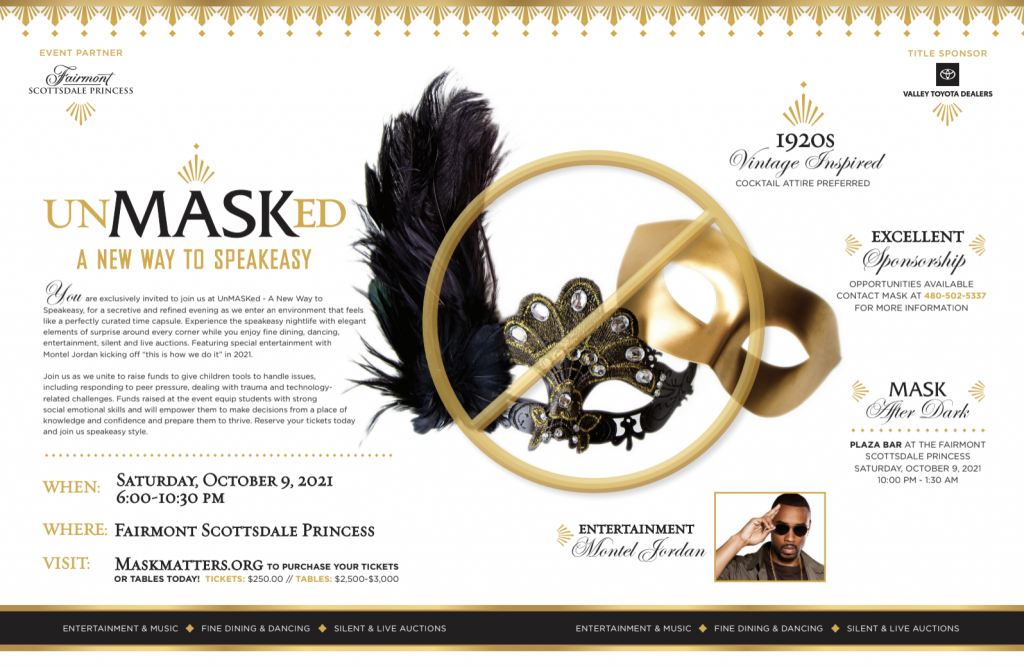 Like most nonprofit organizations, MASK relies heavily on donations and volunteers to continue their important work. One of the most anticipated fundraisers is the annual ball and has become the “can’t miss” event of the year.

“This year’s event will take place on October 9, 2021 at the beautiful Fairmont Scottsdale Princess,” says Cabral. “This year’s theme with a pretty significant and meaning given what we’ve all gone through recently with the Pandemic. “UNMASKed-A New Way to Speakeasy” promises to be an unforgettable experience of entertainment, silent and live auctions, fine dining and dancing.

“Guests will experience the speakeasy nightlife with elegant elements of surprise around every corner while enjoying fine dining, dancing, entertainment, silent and live auctions. Featuring special entertainment with Montell Jordan kicking off “this is how we do it” in 2021.”

Today many of Cabral’s children are standing at the brink of adulthood or have already spread their wings, yet her crusade continues. It’s something she truly believes in and has happily seen positive results from – beginning with her own kids.

As the word spreads and more and more parents realize that finally there is an effective and relevant resource, Cabral expresses cautious optimism.

“Today, suicide rates are at an all-time high and social media is influencing our children’s self-esteem in many ways,” she says somberly. “MASK programs teach children and their families how to handle the ever-changing landscape that our children are living in.

“That’s why I’m on a mission, especially right now as we celebrate 14 years of getting our program out there, I feel like we’re just starting.”

For more information or find out how you might get involved with MASK visit www.maskmatters.org. 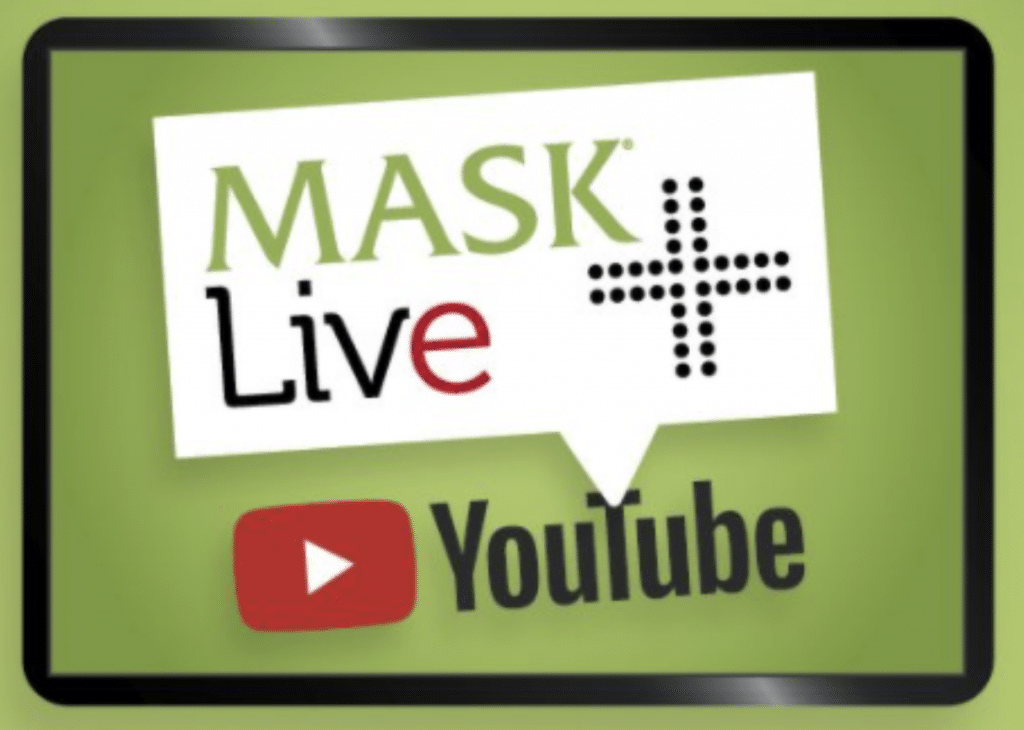