Signature Graphics wasn’t always the beaming beacon of vinyl graphics it is today. Founder, Ken Johnson, worked as a firefighter in the Air Force during the mid-1990s and worked for a couple of years at Corporate America in the sales center.

In 2001, he left his sales position to focus his full attention on UltraShield of Phoenix. The business focused on protecting vehicle paint as well as offering protection from the glaring Phoenix sun with window tints for cars, homes and corporate real estate.

In 2002, he partnered with competitor, Ryan Tounsley, to continue UltraShield of Phoenix.

“We were competitors for some time before joining forces,” Johnson explained. Looking toward the future of the industry, Johnson knew that protective films were just the tip of the iceberg. He was compelled to expand the business to include vinyl graphics and car wrap.

“Ryan didn’t agree with that direction,” Johnson said. “He was concerned about the obstacles a vinyl graphic company would face.” In 2008, Tounsley bought Johnson out of UltraShield of Phoenix. Freed of his previous responsibilities, Johnson founded Signature Graphics.

“I’m not going to lie, we truly struggled for a few years,” Johnson said.

Despite no formal training, Johnson now considers himself a connoisseur of vehicle wraps. Through online tutorials, he taught himself about graphic design basics for Adobe Illustrator and Photoshop. As soon as the company had gained some traction, Johnson was sure to hire on the right people to help guide him in those early years.

I believe our work speaks for itself. My goal is simple. We put forth a quality product that keeps our customers coming back for more and referring their friends.”

Signature Graphics was founded in June 2008. For two years, the company struggled with the economic recession facing the country and Arizona in particular. It was, according to Johnson, the recession that actually came to propel the business forward. As businesses began to recover, they viewed the marketing advantages of a “rolling billboard” – wrapped company vehicles – as an inexpensive way to begin taking the first steps forward.

“The return on the investment justified the initial cost for most companies,” Johnson said. “I believe that the opportunity to offer cost-effective marketing during the downturn is what kept the company going.”

Over the years, Phoenician drivers have become accustomed to wrapped vehicles. Signature Graphics is responsible for many of the cars you pass on the freeway.

“We’ve worked with Holtzman Home Improvement. Beginning with one vehicle, we’ve now wrapped a fleet of more than 20 cars. We’ve also wrapped more than 200 vehicles for Alaskan Home Services. Both companies have come to respect and believe in the effectiveness of the rolling billboard.”

At the core of the company is a professional, experienced and knowledgeable group of people that work hard to ensure the quality of their product. Johnson is quick to rave about his excellent staff.

“I believe our work speaks for itself,” he said. “My goal is simple. We put forth a quality product that keeps our customers coming back for more and referring their friends.”

Johnson admits that Signature Graphics offers services at higher prices when compared with similar companies in the Valley, but he believes the quality of the work and the satisfaction guarantee demonstrates the justified difference.

“Here in the Valley, we’re known to have higher prices than most companies in our industry,” Johnson stated. “But, I always invite clients out to physically see the quality of work and product. Essentially, we emphasize the phrase – ‘You get what you pay for’ – because Signature Graphics gives you incomparable quality for the price you pay.”

To this day, Johnson is pleased with the decision to strike out into the vehicle wrapping business. He loves that each day brings a new challenge.

“Our clients range from businesses – large and small – to individuals,” Johnson said. “Sometimes a business will bring in a single vehicle, sometimes a fleet. One day, we may be adding logos or brands to a few vehicles, the next day, we’re wrapping a fleet of vehicles in an advertisement. Some days, we’re doing personal wraps for someone who wants to change the paint color on their car without having to break the bank.”

Located in Scottsdale, Johnson has seen some nice cars. The best car to roll into Signature Graphics for a wrap job was a 2015 Porsche 918 Hybrid. For an exotic car enthusiast like Johnson, it was an exhilarating day at the office.

“There were only 918 of these vehicles ever produced and it has a price tag around $1.6 million,” Johnson explained. He continued to share that his employees take great joy in working on those higher-end vehicles from Lamborghinis and Ferraris to the occasional Rolls Royce and Bentley. 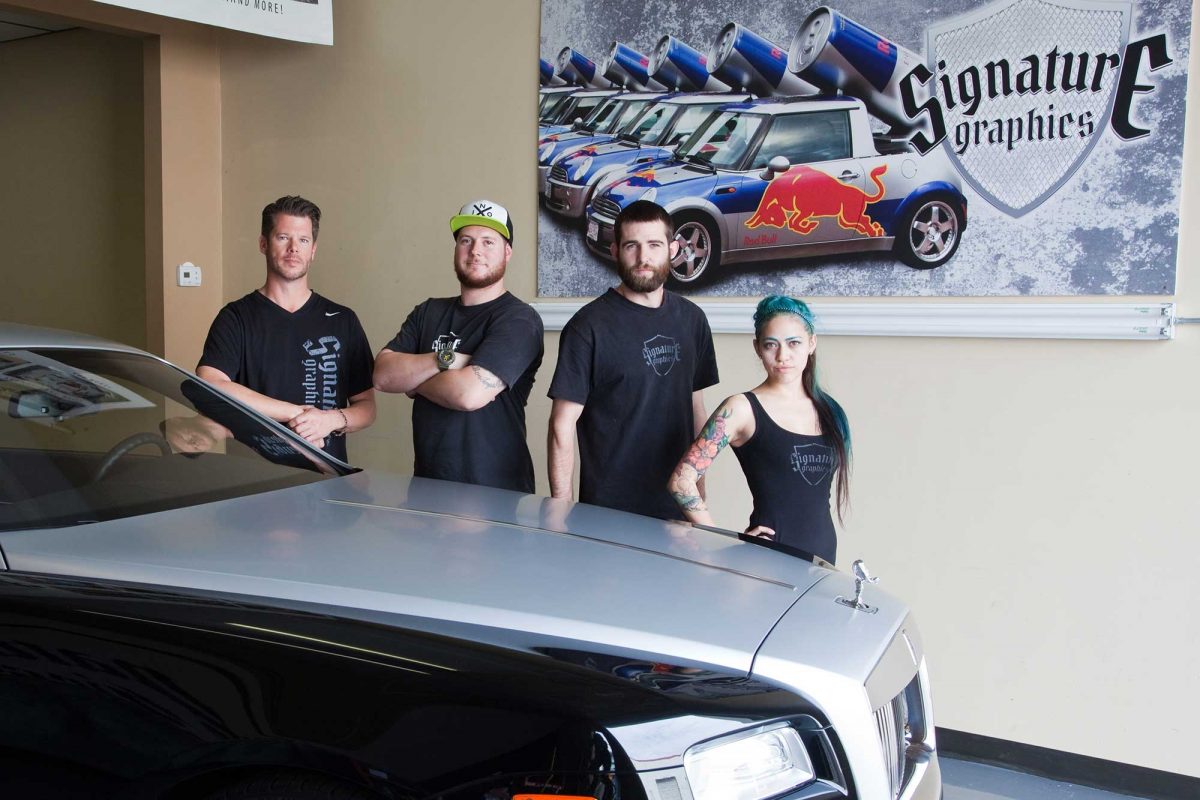 So, you may be asking yourself what exactly a vinyl car wrap is and how it’s applied. The wrap is actually a large vinyl graphic or decal that is applied directly to the exterior of the vehicle – on top of the original paint. If a client decides to remove a wrap or change it to a new one, the vinyl can easily be removed and the vehicle’s paint will remain in its original condition.

“The process of wrapping a car is typically done in three stages,” Johnson explained. “First, we need to design the graphic. During this phase, we measure the vehicle and design the graphic accordingly. Once the design is complete, we produce the actual graphic wrap. It is printed and laminated to protect the vinyl from the outside factors that could cause it to deteriorate over time. Once that cautionary step is taken, the graphic is installed.”

Signature Graphics also offers removal services if a promotion has ended, an employee has left the company or if the client wishes the graphic removed for any other reason.

According to Johnson, the design phase is the most important step toward an effective rolling billboard. As soon as the company receives the deposit, the design team sits down with the client to gather information and discuss the concept in mind.

“Within a few days, our design team will have a mockup made and provided to the client. The mockup models exactly how the vehicle will look following installation. Once the design is approved, we provide the client with a large-file format of the design to use in other marketing formats.”

Johnson reiterates the importance of customer satisfaction. Unlike many Valley businesses, Signature Graphics doesn’t charge by the hour or the number of proofs. Johnson encourages clients to return changes, instructing employees to go back-and-forth until the client is entirely satisfied with the end product. 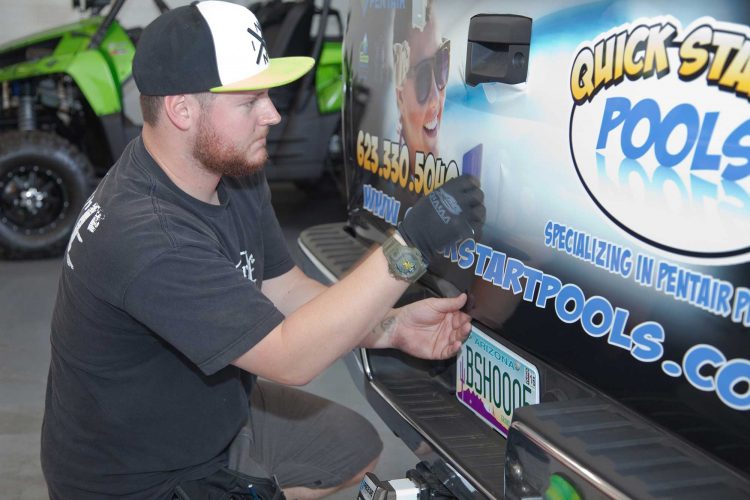 Looking to the Future

Looking past the last 15-plus years, Johnson is proud of the business he has built and the “family” of team members that have joined him in creating a successful company. In looking to the future, he does hope to expand the company with a larger location and the addition of more talented staff members as business continues to grow. He has no immediate plans for either at the time, though.

“I enjoy the small business environment,” he said. “With a bigger business, there usually comes more problems. Today, I have five superb staff members. As demand for our services continues to rise, however, I know we will have to expand in the years to come.”